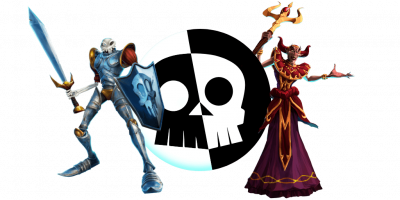 An encyclopaedia about MediEvil you'll be dying to read!
WARNING: BE WARY OF UNMARKED SPOILERS! READ AT YOUR OWN RISK!
Featuring 50 articles and 188 files since February 2022.
The Wiki's lofty ambition is to become everyone's one-stop destination for all things MediEvil.
If you think you can help, don't hesitate to join us!

This version is enhanced with up-rendering, rewind, quick save, custom video filters and trophy support, including a trophy for unlocking Sir Dan in the game's versus mode. The game is available as part of the PlayStation Plus Premium service but can also be bought separately. Find out more here. 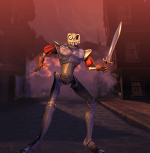 Sir Dan in London.
Sir Daniel Fortesque (1254 – 1286) was a knight of the kingdom of Gallowmere. In 1286, he was charged with leading the militia into battle against the rebelling court magician Zarok in what would become known as the Battle of Gallowmere. Ignobly, Sir Dan was killed by the first volley of arrows. The king, unimpressed with Dan's performance, weaved a legend about the felled warrior, declaring him the Hero of Gallowmere.
Read more...