From MediEvil Wiki. You'll be dying to read!
(Redirected from Points)

The MediEvil Rolling Demo is a version of MediEvil that is 400 days older than the final version of the game. The demo was only released on two PAL region demo discs in late 1997 – Winter Releases '97 demo 01 and Registered Users Demo 02 – the former of which was given out at the European Computer Trade Show.[1] Files on the discs suggest that the demo finished development around August 14, 1997.

As the name suggests, the demo is largely non-interactive and cannot be properly played without cheating or hacking. However, the player can use

to skip any of the demo's segments and pressing

can be used to return to the demo disc's main menu.

The demo lasts just over 10 minutes (loading included) and is made up of 17 segments which show off 10 unique levels. The whole sequence is as follows:

After the final segment the player is sent back to the main menu of the demo disc.

Being over a year older than the final game, the MediEvil Rolling Demo resembles the arcade classic Ghosts 'n Goblins more closely than the Zeldaesque format of the final product. Elements like the Chalices of Souls, Help Gargoyles, Merchant Gargoyles, books and the inventory do not exist yet. Potentially offensive religious references are yet to be censored. Development is in full swing and most levels are only half-finished.

This is not the MediEvil you know.

The MediEvil Rolling Demo features a vastly different control scheme. Most notable are the tank controls when moving Dan around without the analog stick. Dan is also capable of sneaking and quickly turning around 180°, both moves that were removed before release.

as opposed to pressing it will bring up the HUD, but you cannot control Dan while doing so. Holding

doesn't do anything at all, but you still won't have control of Dan until you release the button.

The general button layout will be identical to whichever digital mode was last active. With this setting, Dan does not turn around when the analog stick is moved in the opposite direction of where he is facing; he walks backwards instead. If the analog stick is tilted only slightly, Dan will sneak.

The general button layout will be identical to whichever digital mode was last active. With this setting, Dan turns to face the direction of the analog stick and walks in that direction without exception. If the analog stick is tilted only slightly, Dan will sneak.

The exact effects of difficulty levels on the game are unknown, but they do not seem to change the points earned for killing enemies or the amount of damage that weapons deal to them. However, the game does check the current difficulty whenever an enemy is first loaded in, so it is likely it has some effect on them.[2]

Difficulty levels are not present in the final game.

Although no FMVs are included with the demo, there are several references to them inside MEDIEVIL.EXE:

6AV, 12AV, 13AV and 14AV do not appear in the lists, meaning they were probably not finished or planned yet.

Ten levels are shown off as part of the demo: The Graveyard, The Desecrated Church, The Scarecrow Fields, The Ant Caves, Pumpkin Gorge, The Sleeping Village, Pools Of The Ancient Dead, The Asylum Grounds, The Haunted Ruins and The Ghost Ship. However, references to more levels than this can be found in the demo. Starting at offset 0x8E00C in MEDIEVIL.EXE is a numbered list of levels (left). An updated, unnumbered revision of this list also appears in later versions of the game, including the final one (right).

Levels in the list that are preceded by an asterisk are unavailable to play in the MediEvil Rolling Demo. However, despite not being marked with an asterisk, The Pumpkin Serpent and The Crystal Caves are also not playable.

Notably, ten levels on the list did not make it into the final version of the game: The Coffin Vaults, The Fields Of Dust, The River, The Muddy Riverbank, The Mud Slide, Circle of Shadows, The Silver Wood, The Halls Of Illusion, The Hub and The Great Machine.

The list also does not include Dan's Crypt, Return to the Graveyard or the Hall of Heroes, suggesting that these levels were conceptualised at a later date.

The pause menu featured in this demo is completely different from the retail one, both in terms of how it looks as well as its available options. Additional options can be unlocked using the DEBUG1 and DEBUG2 cheats.

Pick-ups are items that are of use to Sir Dan on his journey. In the MediEvil Rolling Demo, pick-ups generally take on forms that are different from the ones that appear in the final game. For example, Dan's source of energy in the demo are Energy Bones rather than Health Fountains or Energy Vials.

Pick-ups are also presented differently in the heads-up display; whenever Dan is near a pick-up, a semi-trasparent version of it will appear in the bottom right corner of the screen until it is picked up or Dan gets further away from it.

Chests are containers from which pick-ups can be obtained. There are three types of chests in the MediEvil Rolling Demo:

Dan's energy is represented by glowing green bones known as Energy Bones. These were replaced by Energy Vials and Fountains of Rejuvenation in the final game, while the Energy Counter, which keeps track of the bones, was replaced by the Life Bar.

At the beginning of the game, Dan will have three Energy Bones. More Energy Bones can be found in the environment or dropped by enemies, especially the final enemy in a wave of enemies.

Losing all Energy Bones will cause Dan to lose a Life. A single Energy Bone is lost when Dan sustains damage from an enemy attack. If Dan suffers a fatal event, such as falling or drowning, then he will lose a Life and his bones will be reset to three.

The Energy Counter will display the first three bones individually. After Dan collects a fourth bone, the bones are stacked and a number will show the current amount. Although Dan can carry a large number of Energy Bones, the Counter will not update beyond the first nine, much like the Life Counter.

Dan's Lives are represented by his skull instead of Life Bottles, both in the HUD and within the game's levels themselves.

Dan begins the game with three Lives. More Lives can usually be found in areas off the beaten path within levels. If Dan loses all of his energy he will lose a Life.

Although Dan can carry a large number of Lives, the Life Counter will not update beyond the first nine.

Potions are pick-ups found throughout the levels. They are easily recognised by their shaking, releasing of steam and jumping in the air. When Dan drinks them, they cause a variety of effects:

Rune Keys, also known as Rune Stones or Runes, are objects that can be used to open the many doors and gates in the levels.

Functionally, Rune Keys remain unchanged in the MediEvil Rolling Demo. However, because the inventory does not exist yet, collected Rune Keys appear in their own panel instead. The panel, located in the bottom left part of the screen, shows up only when a Rune Key is collected or when Dan is near a door that requires a Rune Key.

There are no Rune Locks shaped like begging hands yet either, which is why some doors are textured to indicate which Rune Key is needed to open them, such as the ones in the Pumpkin Gorge level.

Similarly to how it works in Ghosts 'n Goblins, Dan can only carry a single weapon at a time. New weapons can be obtained from chests or found on their own in the levels. Upon picking up a new weapon the old one is discarded.

Each weapon can be powered-up using the Weapon Power-up Potion. Weapons can also be stolen by Imps, in which case Dan will tear off his own arm to defend himself. Unlike in the final game, all weapons are unlimited and cannot be used up. 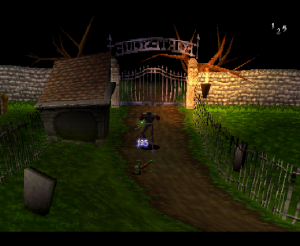 Points are awarded for picking up moneybags and dispatching enemies. The Score Counter in the top right corner of the screen keeps track of points. Points were eventually scrapped and replaced with the Chalice of Souls and Gold systems.

Dan only earns points for enemies he kills directly, i.e. enemies who die by drowning or a Smart Bomb do not award any points. Each enemy type awards a different amount of points. Awarded amounts range from 50 to 5000 points:[2]

* This enemy cannot be encountered in the demo, but can be found in the code. 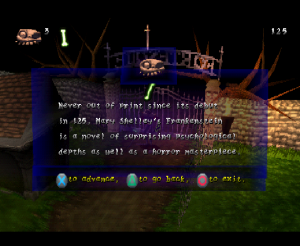 during gameplay, a dark blue scrollable text box will be brought up on the screen. While the box is on the screen the game is completely paused just like when accessing the pause menu.

At the top of the box is the HUD icon for Dan's lives while instructions on how to control the box appear near the bottom:

to exit. The following text and sprites are within the box itself:

According to MediEvil's producer Chris Sorrell, the box is a display mechanism for the game's help books that he was working on at the time. The text shown in the box was chosen randomly for the purposes of testing.[4]

The following cheats will only work after Dan has been made controllable.

. New options will then appear in the pause menu.[5]

. New options will then appear in the pause menu. This cheat unlocks all DEBUG1 options as well.[5]

The following codes are compatible with both releases of the demo: